Last week, our group, along with collaborators at MUSC, published an article in the journal Brain and Language. It’s titled, “Activity Associated with Speech Production Measured Through Direct Cortical Recordings,” and you can find the article here*: https://authors.elsevier.com/a/1UcHB,28iJFUnV

Although most of our research focuses on changes in speech and language after an individual experiences a stroke, this article reports a study where we had the opportunity to measure brain activity, directly from the brain, in two individuals with epilepsy. In this study, we were interested in looking at how certain brain regions become active prior to, and during, speech production. This is relevant for understanding post-stroke speech difficulties because regions responsible for apraxia of speech, a motor speech disorder that can occur after a stroke, have been debated in the literature.

First a little background: The technique we used in this study is called electrocorticography, or ECoG. The purpose of ECoG is to locate where a seizure is occurring in the brain so that the patient’s physician can prescribe the proper course of treatment, including surgery. In research, this technique has been used to measure the timing and response of different brain regions to different conditions – for example, speech production. ECoG is a powerful tool because it allows researchers to measure activity as it occurs, directly from the location wher 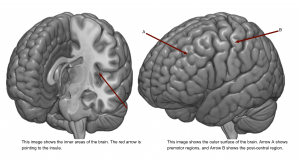 e it is occurring.

And now, our study: Over the last few decades, debates about which brain areas are involved in speech production and articulation difficulties have been debated. In our study, we used ECoG to determine which regions respond to speech production first, and how strongly these regions respond. We were primarily interested in the insula of the brain (see photo to the right). The insula is credited with a number of functions, but until recently, it has been difficult to study the insula using ECoG because it is rather concealed by other parts of the brain. The insula has been implicated in speech production, but so have other regions – for example, motor regions and post-central (sensorimotor) regions (also indicated in the figure on the right). Using ECoG, we found that the insula is indeed active during speech production, but that sensorimotor regions are active first, and demonstrate stronger activity during speech production. The premotor areas were also highly active. This finding suggests that sensorimotor regions play a “leading” role in articulation, and perhaps the insula plays more of a supportive role. However, more research is needed to confirm these results.